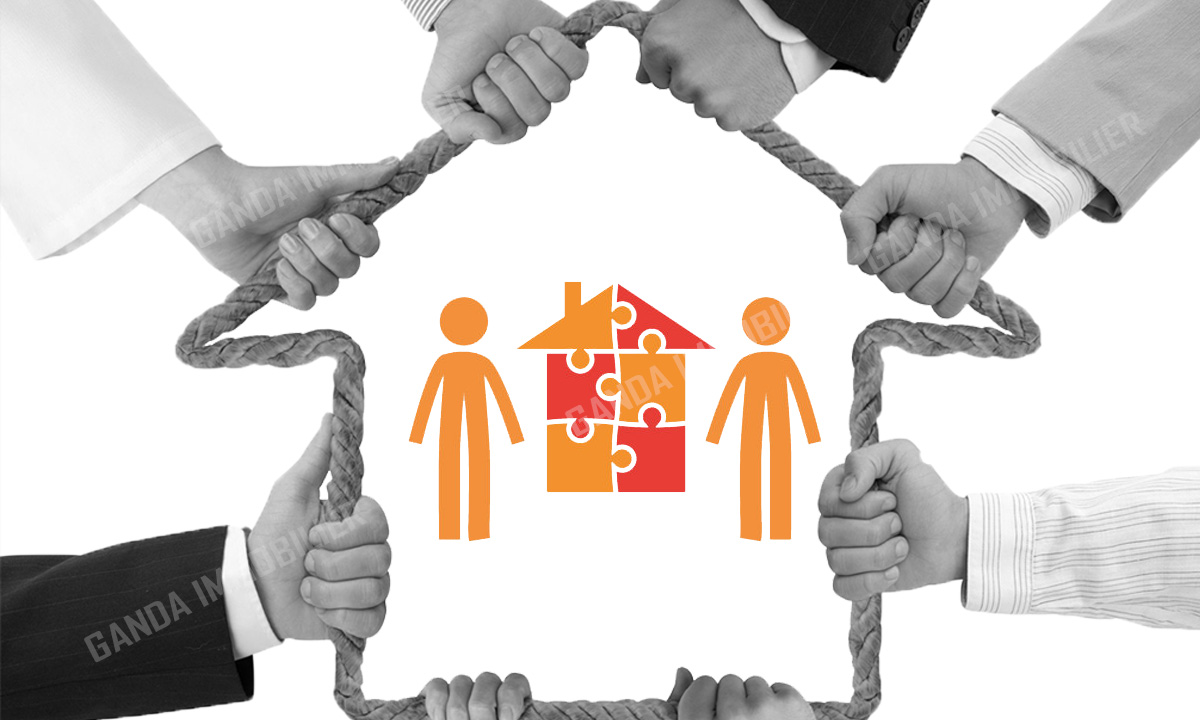 What is the meaning of the word “co-ownership” in the real estate sector?

How the condominium works

Whether it is a vertical or horizontal co-ownership, the real estate property is divided between two categories. These include private parts on the one hand and common areas on the other. The private parts belong exclusively to each co-owner while the common parts belong to the condominium. Each co-owner is necessarily full owner of at least one lot whereas a lot consists of a private part and a share of the common areas.All the co-owners form the syndicate of co-owners. The union’s mission is to manage the administration of the common parts and to preserve the property. The union is represented by by a trustee who is responsible for representing the condominium and taking care of its administrative and financial management. Among other things, the trustee must convene the general meetings of co-owners, keep the accounting of the condominium, ensure the maintenance of the property, manage the staff of the condominium and represent the syndicate of co-owners, etc.
Furthermore, the trustee is liable when he commits a fault with the union or one of the co-owners. However, when a fault is committed against a third party who is not of the union, the responsibility of the entire union is incurred. Now that the concept of real estate co-ownership is more or less elucidated, let us take a closer look at the benefits it could bring but also the risks associated with it.

What are the benefits of co-ownership?

A genuine time saver: since the trustee is the one who takes care of the maintenance of the building, the co-owners have less to worry about and can devote their time to other things.
Lower expenses: the expenses incurred are shared between the co-owners, and thus, these generally become lower for each.
Security: It is important to note that living with neighbours in the same building provides more peace of mind regarding to break-ins.
Sociability and solidarity: as trivial as they may seem, these benefits are not the least. Life in co-ownership, with the collaboration between union members that it involves, will lead each co-owner to develop the ability to live and work with others. I am even tempted to say that this life together arouses altruism in each co-owner insofar as they find themselves obliged to think of others on a daily basis.

It is well and good to list the benefits of co-ownership, but ignoring the few drawbacks of this lifestyle would be a mistake.

So what are the drawbacks of co- ownership??

– The insolvency of some co-owners: There may be black sheep in the rank of co-owners. Some may therefore fail to pay their fees despite reminders from the trustee, whereas in any cases, the union must pay for the expenses.
Long decision-making process: since the simplest decisions must be taken in the community through a vote and a minimum quota to be reached, the procedure is further lengthen.
Threatened privacy: Generally, the internal regulations set limits, especially on noise pollution. However, in case of soundproofing problems for example, you will sometimes have to hear what your neighbours say from their apartment and vice versa. A detached house would give you more privacy.
High vacation rate: With the freedom restrictions that apply to condominiums, and in turn to tenants, this one appears more restrictive than renting an apartment in a single-owned collective building. As a result, tenants often prefer to resort to a detached house where possible. Thus, the higher the number of neighbours in a building, the less interested are the customers; which is bad for real estate profitability.

Considering the generalist points outlined above, it is easy to say that real estate co-ownership deserves an interest. Its benefits are not negligible and an investor engaged in it will certainly not be disappointed if he or she is dealing with professionals and identifies the right targets. That said, real estate condominiums would abound if everyone fully understood the operation of this system. In a country like Benin, where real estate is prized, how is real estate co-ownership perceived today?

The Beninese and the real estate condominium

Expanding condominium real estate investment in Benin
A boom in the real estate condominium subsector would certainly make the real estate sector more attractive. To achieve this result, several mechanisms can be exploited, among other things, an awareness of the benefits of co-ownership in terms of investment costs and profitability; government programs to drive the subsector into strength; tax facilitations, etc.In short, real estate co-ownership offers many advantages despite the few drawbacks it presents. Both investors and individuals would benefit from adopting this method of investment.

co-ownership
previousShould you buy new or old real estate?
nextIs it advantageous to go through a real estate agency?

Owning a house is a real source of pride for Africans, and more particularly for Beninese. The slogan “every Beninese with a roof over his head”, widely promoted by real estate agencies, is a good...
Lire Plus
5 April 2022

Real estate hunter, a job in the field

Housing is a vital need and our society is becoming more and more mobile. Professionals are therefore needed to manage these movements. Real estate transactions are therefore not about to decrease given the evolution of...
Lire Plus
30 March 2022

Real estate agency fees are the fees paid to the professional involved in the sale or purchase of real estate. Considered as the remuneration of its work as an intermediary between the buyer and the...
Lire Plus
16 March 2022

Sell a property: What type of mandate to give to a real estate agency?

Owner of real estate, you want to sell it or rent it out. For this, you plan to benefit from the services of a professional real estate agency. Be aware that a sale concluded through...
Lire Plus
7 March 2022

how to sell your house fast?

You are an owner and you want to sell a property as quickly as possible. Where to start ? What can you do to make your house stand out clearly from the thousands of other...
Lire Plus
2 March 2022

Agency fees: justified or not?

To sell an apartment or to buy one, using a real estate agency is synonymous with facilitating and accelerating the transaction.But behind this service, there are fees or
Lire Plus
24 February 2022

Entrust the management of your property to a professional or do it yourself? This is no less important concern that is constantly faced by those who own real estate and would like to rent it...
Lire Plus
16 February 2022

Some sectors such as real estate are practically unaffected by the crisis. This is why it is said that real estate is a sector of a thousand and one opportunities. But like any other economic...
Lire Plus
12 February 2022

Is it necessary to have your property appraised?

Having a property appraised means finding out about the real value of the property through a professional. Real estate valuation consists of giving a value, a selling price, to a property. The importance of having...
Lire Plus
11 February 2022

Is it advantageous to go through a real estate agency?

The wish of all Beninese is to have their own roof. To achieve this, it is necessary to go through the acquisition or construction of real estate. However, some individuals are still reluctant to be...
Lire Plus
29 August 2020

Not keen on working every day to support yourself? If so, maybe you should think about real estate. If they don’t work every day, how do real estate annuitants make money then? The real estate...
Lire Plus
4 December 2018

What does the notary do in real estate?

A real estate project is something that a lot of people are interested in. Whether it’s a purchase project, a real estate (plot, house …) sale or a renting out, the owner of the project...
Lire Plus
23 November 2018

In Benin, real estate is considered as the most important asset. This is the reason why local Beninese, those of the diaspora and even some foreigners wish to invest in real estate in Benin. But...
Lire Plus